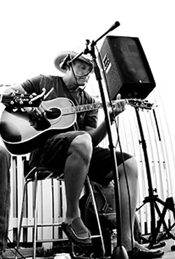 A songwriter credited with well over ten songs that appear on numerous Garth Brooks records, including Garth’s recent release; “Dive Bar”, featuring Garth and Blake Shelton. Bryan was also credited with Garth’s single; “All Day Long” as well as three songs reaching #1; â€œGood Ride Cowboyâ€, â€œThe Beaches of Cheyenne,â€ and â€œAmerican Honky Tonk Bar Association.â€ In addition, Bryan served as the opening act for Garth Brooks performing in front of over three million people in two years. Currently Bryan is working on Garth Brooks Stadium Tour as well as getting to work with Trisha Yearwood.

Bryan was born in Shreveport, Louisiana. However, he grew up in Tennessee in the Nashville area. Early on Bryan found his gift in the form of athletics. He earned a football scholarship to the University of Mississippi where he became the starting defensive end for three years. Bryanâ€™s senior year he was awarded the John Howard Vaught award of excellence. He left the University of Mississippi in 1983 six hours short of his degree, something that would haunt Bryan endlessly. So, twenty years later Bryan would enroll in college once again to obtain his degree in Broadcast Journalism. Bryan, went back to Ole Miss to walk the line, and graduated in the spring of 2003. Bryan enjoys traveling to Oxford, Ms. to perform and watch the Rebels play ball.

Bryan began his musical quest as a song plugger for his father, and later for Ricky Skaggs, and The Statler Brothers. He attributes his writing know how to hearing all the great songs he got to hear daily while being a son to a legendary record producer Jerry Kennedy, and to growing up in the same house with a mom (Linda Kennedy) who was singing and recording records as a teenager, and two brothers who would become most influential in Bryanâ€™s life and in his career. (Gordon and Shelby Kennedy)

You will always find Bryan working on something new.  He makes his home on the gulf coast of Florida, where he somehow finds time to perform as a singer while he continues to write books, serve as a keynote speaker and offer his experience as a certified Life Coach.

Some of Bryanâ€™s other Garth Brooks cuts include;